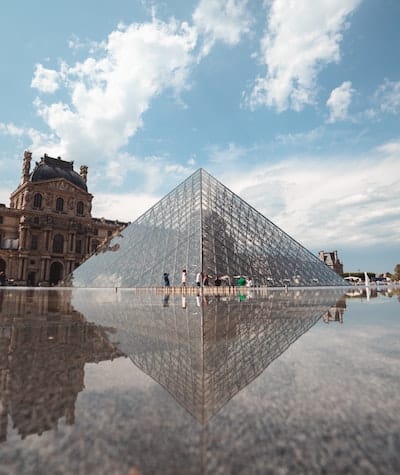 Which tier do you really need to reach?

When faced with adversity, people are wired to do what it takes to survive. Psychologist Abraham Maslow famously described this aspect of the human psyche as the hierarchy of needs. Basically, the theory and corresponding pyramid illustration explain human motivation — until the lower needs in the pyramid are satisfied, those needs will “monopolize consciousness.”

It struck me recently that human financial needs occur in a similar structure, and that financial independence (FI) is closely related to progress through Maslow’s hierarchy.

I’ll explore this in a bit more detail below, but, I believe that the only reason that financial literacy and FI matter at all is that they help us advance through Maslow’s hierarchy of needs.

In my view, building wealth isn’t about just having more money. It’s a means to an end — wealth creates the opportunity to pursue fulfillment (or, as Maslow describes it, “self-actualization”).

Several of these are pretty intuitive, but I do want to clarify the highest two tiers. The esteem tier is about feeling a sense of pride and accomplishment. The self-actualization tier is about fully achieving your potential in all parts of your life.

Until the lower needs are met, people are willing to sacrifice the higher needs and put forth effort to address their current need. For example, if you are starving (a physiological need), the theory suggests that you will be willing to delay finding safety while you are trying to find food.

Traditionally, Maslow’s hierarchy is presented in a pyramid format, with the lower tiers at the bottom. 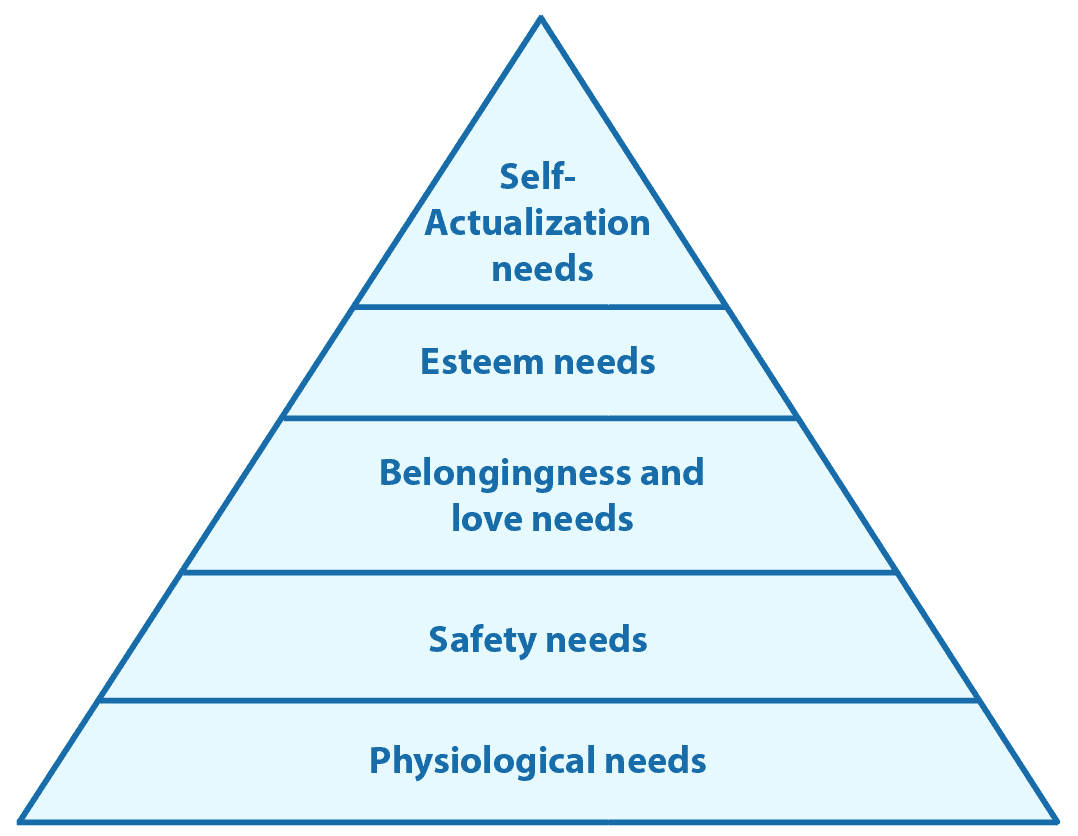 Why is the pyramid structure helpful?

I like this pyramid presentation approach and I’m going to adopt it below to show some other hierarchies.

The pyramid shape illustrates that the hierarchies act as a funnel. You cannot progress through until you have satisfied the initial wider tiers.

Visualizing the higher tiers as the more narrow parts of the pyramid is helpful, too. This shows that it can be difficult to progress through the hierarchy. Not everyone chooses to or is able to reach the higher levels in the hierarchy, for any number of reasons — lack of opportunity, lack of focus, lack of effort, etc.

Recognizing the funnel nature and difficulty involved with progressing through the pyramid should express a sense of urgency. Your life will necessarily feel more meaningful and fulfilling if you are able to progress to the higher levels of Maslow’s hierarchy.

If you ask people why they are pursuing FI, there are several frequent answers.

In a recent informal survey I conducted, the top two motivators for retiring early were (#1) a feeling of freedom and independence and (#2) more time with family.

Overall, people in the FI community want to spend more time and money…

These are all activities that rank highly in Maslow’s hierarchy of needs.

The modern model of work (40+ hours per week until your mid-60s or later) is an obstacle that is directly blocking progression through the hierarchy.

I want to explore a comparable hierarchy structure in terms of financial independence. First, let’s look at a budgeting-focused hierarchy.

Similar to my rules for investing and guide to managing a lump sum of money, this pyramid suggests how you would (or should) prioritize budgeting your income. Generally, most financial writers agree on the basic principles of budgeting and money management.

Each pay check when you put together your budget, you should first pay for any immediate physical needs. Then with leftover money, pay any other bills and obligations. Next, you can begin saving, giving, and purchasing more than the bare minimum when you’d like to (luxury goods or saving for future needs). Finally, you can then invest until you achieve financial independence. 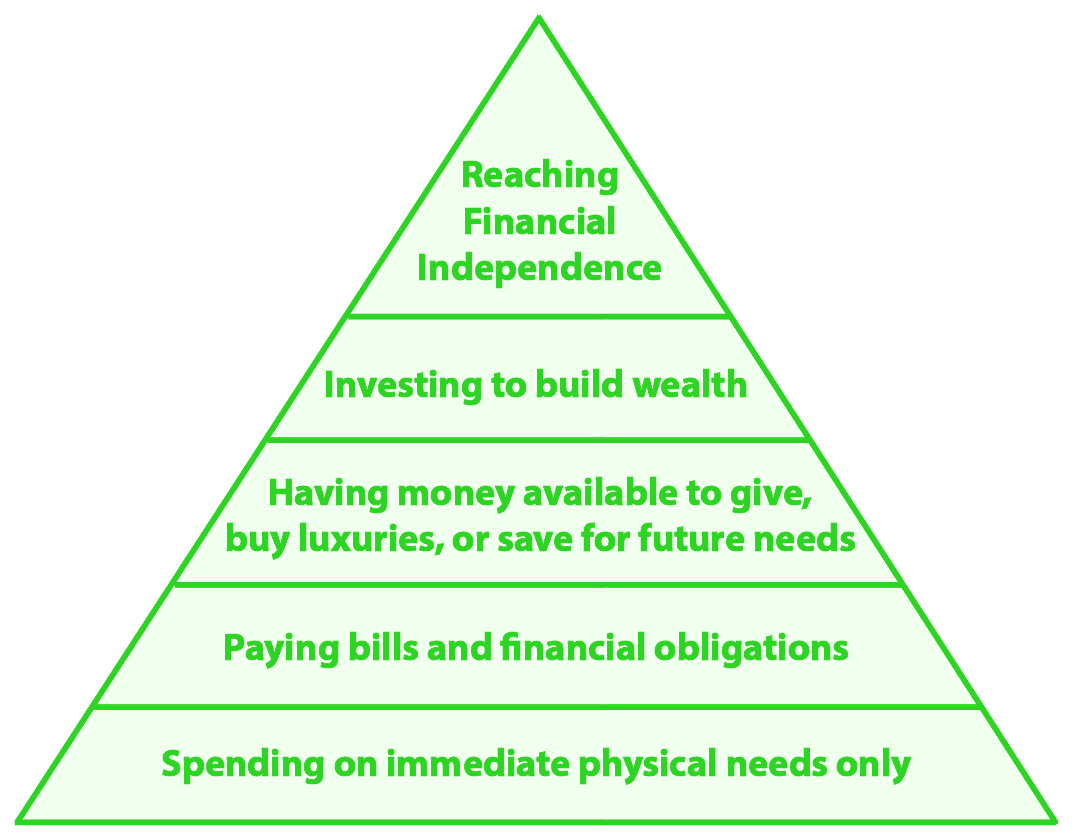 Finally, let’s look at the progression of financial independence that can be achieved. You can progress from completely dependent on working to completely independent. 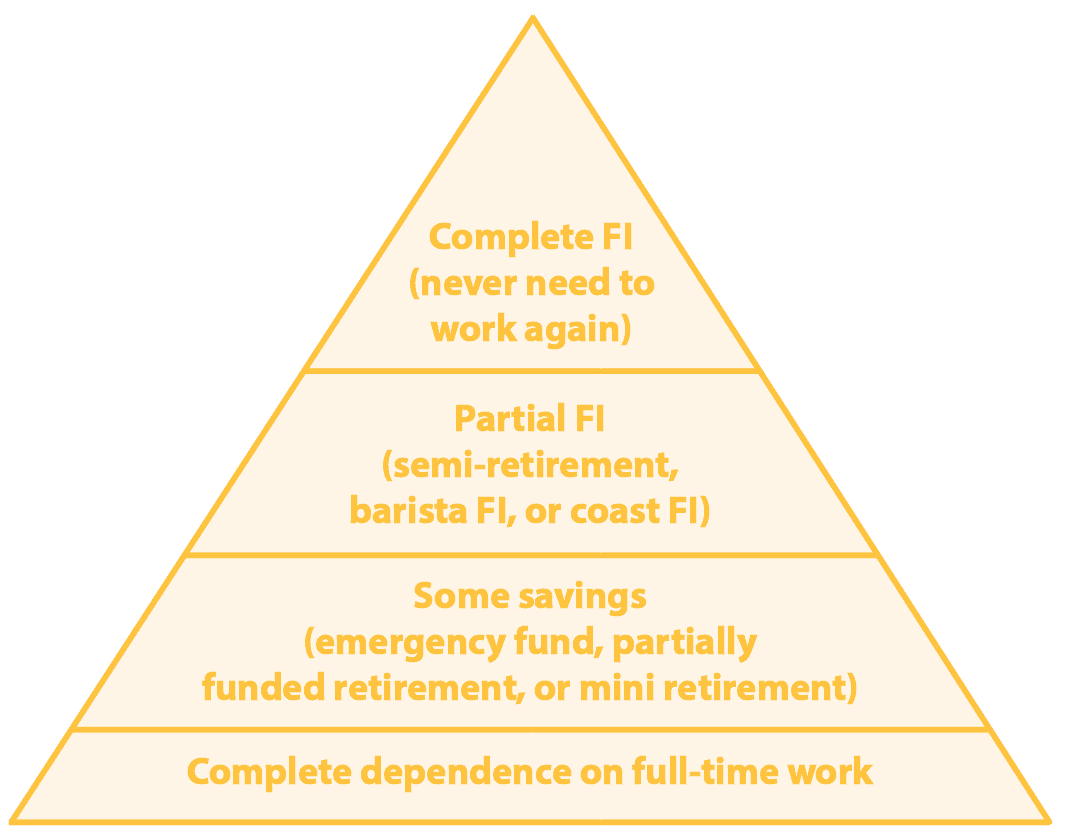 I’ve already made the case that the first level on this pyramid, dependence on full-time work, restricts your ability to progress through Maslow’s hierarchy. Most people in the personal finance blogging community would agree that achieving some level of financial independence gives you the best chance to spend time pursuing fulfillment in life.

Which FI tier do you really need to reach?

The real question we need to be asking, though, is where on the FI hierarchy can you start to efficiently advance through Maslow’s hierarchy? In other words, you might not need to wait until you achieve full financial independence.

There’s definitely a subjective element to answering that question. What does fulfillment or self-actualization look like in your life, personally?

To me, level 2 starts to buy some peace of mind, but level 3 makes a huge difference.

The SR Wife and I plan to leave our full-time jobs as soon as we’re able to sustainably live off of income from our investments plus moderate part-time work.

Working part-time in a role that aligns with your personal core values can actually accelerate your progression through Maslow’s hierarchy.

I believe that working towards something that is meaningful to you can be more fulfilling that not working at all. And if you still have hours available on your calendar to rest and pursue other interests, then you’re getting the best of both worlds.

Where are you on each of these pyramids?

What combination of work and financial independence would be most fulfilling in your life?