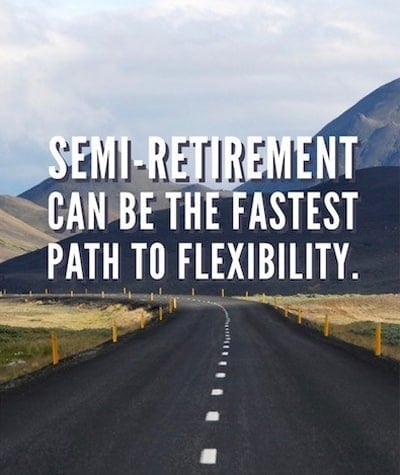 Consider the FIRE lifestyle vs traditional retirement vs semi-retirement

In the semi-retirement explanation post, I ran through some retirement plan comparisons focusing on the math behind the FIRE lifestyle (Financial Independence, Retire Early) and semi-retirement. I personally found the numbers to be liberating, but I also know it was just a lot of numbers.

I was interested in seeing a visual comparison as well. So I built these graphical explanations of traditional retirement, the FIRE lifestyle, and semi-retirement. These are powerful in their own way.

What is traditional retirement?

In all approaches to retirement, the first portion of your life is dedicated to growing up — getting an education and learning how to be a human being. This is the portion of the chart to the left of the yellow star.

The yellow star shows the start of your working years. Ideally, this is also when you begin saving for retirement. The first few years, your salary is low so it’s slow-going building your investments. After a decade or two, you’re able to save a bit more and your existing investments start to compound significantly.

Finally, in your 60s or later, you’ve saved up enough to retire. Or you’re forced to retire because you’re no longer able to work. This is the red star on the graph.

After your retirement, you try to maintain your portfolio balance or only draw down on it slightly each year.

What is the FIRE lifestyle?

The rationale behind the popular FIRE lifestyle is that the traditional model is unacceptable. FIRE followers feel that working full-time for 45 years to retire for 10-20 years is a bad deal.

If you don’t like your career, you want to save up and retire early.

In the FIRE lifestyle model, you cut back to achieve a higher savings rate, and your portfolio starts to compound much more quickly. This moves the red star closer sooner.

You also have more years after the red star — your hard-earned early retirement years.

The idea behind semi-retirement is that you can save diligently while working full-time, then quit to do part-time work you actually enjoy.

Many people who live the FIRE lifestyle, and even the traditional retirement lifestyle, find that they feel bored, depressed, or unfulfilled if they don’t have a plan for how to spend their time. Often, they choose to get a part-time job just for fun even if they don’t need it financially. If they could’ve accounted for that income in their retirement, they could have actually left their full-time job earlier!

In the early semi-retirement model, you can choose how aggressively you would like to save. You can have a FIRE-like savings rate, or like I showed in the explainer post, you can actually have a lower savings rate and still leave your full-time job years earlier than you can reach the FIRE lifestyle.

The semi-retirement model moves the red star even closer than the FIRE lifestyle.

You also now have a new, third star — the blue star that represents full retirement once you are no longer interested in or able to work. There’s continued slow growth between the red and blue stars too, if you’re able to live on your part-time income plus some amount less than your safe withdrawal rate during your semi-retirement.

In all three models, the goal is basically the same — leave your full-time job you dislike to go live the life you really want. It’s a race to the red star, and semi-retirement gets you there first.

If you have an ultra-high income, want to live a luxurious lifestyle in retirement (often called “fat FIRE”), or truly love your full-time job, you may not be interested in semi-retirement. You may want to go for complete early retirement from work, or you may want to just stay at your job as long as you can. And if so, that’s great!

For people who aren’t passionate about their desk jobs and make an average income, semi-retirement can be the fastest path to flexibility. You can save for a season, then quit to do part-time work that you find fulfilling.

Here’s an overlay comparing all 3 scenarios.

The FIRE lifestyle and semi-retirement both get you to the red star faster than traditional retirement. You’ll likely be interested in working longer in semi-retirement though, since you won’t be burned out from full-time hours and you’re doing something you truly care about.

The beauty of the semi-retirement years is that it gives you flexibility and control. You can adjust your expenses and income to adapt to changes in the stock market or your interests.

Which retirement approach would be the best fit for you and your family? What concerns do you have?