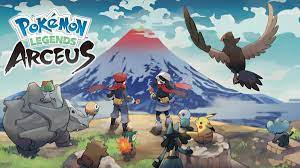 My latest purchase is Pokemon: Legend of Arceus. I know what you might be thinking, dude, you’re a grown man. Well, to you I say, age is just a number and pokemon games have always been and will continue to be a ton of fun, no matter what you age.

I actually bought the game for my son, who really, really,  wanted it. At that point, I figured I didn’t have any games I was into, so I could double up on my purchase and entertain myself too, now that’s some bang for my buck!

Let’s get into the game.

The storyline is nothing crazy, the game is made for kids (mostly) after all. Not complicated at all, linear, and easy to follow. There’s nothing wrong with that, and it’s actually quite refreshing not needing to remember tons of characters and how they weave into the story.

Overall, the storyline still kept you engaged and was fun to watch unfold.

The game also makes it very easy to know where to go next. Your objectives are clearly laid out and have markers indicating where you want to go next.

The gameplay for Pokemon: Legend of Arceus is great. As with any game, getting the hang of some of the controls and menus takes a bit to master, but in this case, not very long. Before you know it you’ll be catching every pokemon in sight!

Again, the game is geared toward kids, so although taking advantage of all the Switches button, it’s not overly complicated where you or a child can’t do the relatively easily.

The game also has a crafting aspect where you’ll be able to make various items from other items you pick up around each area. None are too difficult to find, so it’s easy to keep yourself fully stocked with any item you might want

Here’s the fun part! Obviously, the point of any Pokemon game is to catch them all! There are a ton of pokemon in the game. I’ve been told by my Pokemon expert son, that only ones of a certain region, whose’s name eludes me at the moment, can be found.

There are fan favorites like Picachu, Geodude, Abra and others. You won’t find the likes of Charmander, Squirtle or Bulbasaur though. Of course, you can battle your team of pokemon against wild pokemon or a few other trainers to level up and evolve the pokemon you love most.

Seeing that Pokemon: Legend of Arceus is an RPG at heart, there are plenty of sidequests to be had. The tasks vary from catching certain pokemon from specific areas to finding lost friends to defeating other pokemon in battle. Most are relatively easy enough to figure out and accomplish, while others have a bit of mystery to them you’ll need to figure out.

In either case, the side quests are merely a distraction from the main story or a thorn in the side of the completionist in you. They are by no means required and don’t typically offer anything spectacular you’d need to pick up to make the game any easier to beat.

Even playing as an adult, the game is still fun to play. As I said earlier, it’s essentially an RPG at heart, which is right up my alley. There are a few other aspects of the game I left out, like space-time rifts, alpha pokemon, and lords, but you’ll find out about them easily enough if you decide to purchase the game.

Both my son and myself have been entertained by the game for months now, so I can certainly say I got my money’s worth from this one!