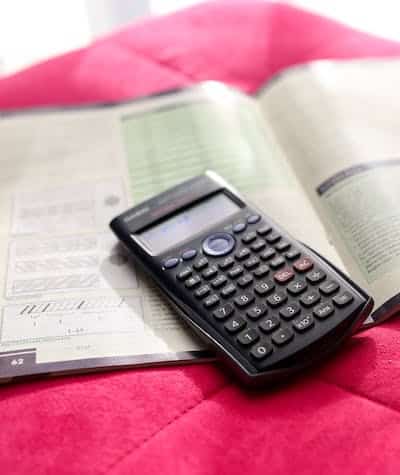 Hi folks! My name is Jesse, and usually I write over at the Best Interest. But today, Mr. SR was kind enough to let me write here on Semi-Retire Plan. Thanks Mr. SR! I want to compare different semi-retirement savings rates to see what you need to save to have a high chance of success.

I was inspired today by Mr. SR’s article how to compare “semi-retirement” to FIRE. I think his graphical explanation does such a good job describing what “semi-retirement” looks like compared to FIRE or a normal career arc. It reminds me of the Fulfillment Curve in that way—such a simple plot, but such a clean idea.

But I’m a bit of a math and numbers nerd, so I got curious. What if we tried to apply some hard numbers to this plot?

We know how the market has performed in the past. We know how someone might typically approach a “FIRE” retirement. We have a few different ways to approach semi-retirement.

I think we have enough information to do some comparisons! I want to see how various semi-retirement paths compare against the “traditional” FIRE retirement.

Like any good study, we need a control, or something we’re comparing against.

I decided to create a baseline using some of the parameters that Mr. SR outlined in the article that inspired me today. For the sake of simplicity, our baseline is a “normal” 20-year FIRE career. Here’s the full list of assumptions:

I used my trusty MATLAB code to run a Monte Carlo simulation of possible futures, using historical data as a benchmark. How did I do this?

If you want some nitty-gritty math details, read on. If you’re a casual reader, just know that–after trial by fire–I’m using a fairly complex method of simulating stock market uncertainty. But you might still enjoy skimming or skipping to the results at the end!

When I first simulated market uncertainties using a Gaussian distribution, a lot of my nerd readers said, “Gaussian?! The Laplacian distribution does a much better job simulating the ‘long tail’ behavior of the market.” Cool! That makes sense; let’s try that out.

So then I wrote another article with simulated data–an in-depth analysis of the past and future of the 4% Rule–and this time I used the Laplacian distribution. But I was met with more nerds squawking, “Laplacian?! Everyone knows that the Ornstein-Uhlenbeck distribution is noise-correlated and exhibits mean-reversion, both of which are vital in modeling financial markets!”

Man! Who knew so many statisticians read my blog!? I thought Ornstein was a type of cow…

Clearly, the method of statistical simulation is an important detail here; a poor method is a recipe for “garbage in–>garbage out.” But it’s also a detail that maybe 1% of you readers really care about.

Just know that I’m know using the Ornstein-Uhlenbeck distribution in this simulation today, and that it’s nerd-approved.

A note about models

I’m an engineer, and I make computer models all the time. There’s an oft-repeated aphorism among model builders: All models are wrong, but some are useful.

In the context of today’s article, keep that quote in mind. I’m not suggesting that my simulation is 100% correct. After all, I can’t predict the future.

But I do think that the model is useful. It’s based on realistic assumptions, and produces realistic outputs.

Importantly for us, it’s easy to tweak the inputs of this model, and then observe the resulting changes in outputs. This is the useful portion. This model can show us how semi-retirement compares against our baseline.

…back to today’s model simulations

Much like historical markets, my simulations exhibit multiple sequences of bear and bull runs. Here’s an example of one simulation:

We can see the bear market in 1973-1974, Black Monday, the Dot Com Bubble, and the 2008 Great Recession in this data. And when we compare it to the simulated data, it certainly passes the naked eye tests in terms of variations and trends. This is a reasonable possibility of what our 22-year old can expect for the 60 years that they’re invested in the markets.

…Back to our 22-year old FIRE aspirant

I ran 10,000 simulations, each of which had a unique, randomly generated financial market. Some of the markets did better than an 8% annual return, while some did worse.

Within each market simulation, I ran the FIRE baseline and multiple semi-retirement scenarios (which I’ll talk about below).

How did our FIRE plans hold up? How many times did our FIREee run out of money before the age of 82?

After chatting with Mr. SR a bit, I came up with the following semi-retirement variables to look at.

To reiterate: I ran through each combination of these various semi-retirement parameters during each of the 10,000 market simulations.

So let’s take a look at the results. There are lots of interesting questions one can ask about how semi-retirement could help, or hurt, retirement plans. For example, how might someone fare if they only worked 16 years full-time, but then worked 10 years part-time? How does this compare to our baseline 20 years of full-time work?

If this person only worked 1 day per week during their 10 year semi-retirement, then their retirement ended up failing in 36.7% of the simulated markets. Yikes! That’s significantly worse that the baseline 20-year full-time FIRE plan (12.1%).

But if our subject decides to work 3 days per week during their 10-year semi-retirement, then their failure rate plummets to 9.6%, which is better than the 20-year full-time FIRE plan.

Clearly, planning the level of your semi-retirement is vital for retirement success!

We know that every little bit of extra income will increase our chances of success… but by how much? How much does semi-retirement help after the baseline 20-year career is over?

So let’s start with a 20-year full-time career, and then taper down to 60% income (or 3 days per week) during semi-retirement.

How much does 2 years of 60% semi-retirement improve the 12.1% baseline failure rate? What about 4 years? Etc.

Interesting! If you don’t mind a few years of semi-retirement, you can give yourself a lot of added retirement security. Our 22-year old can work full-time until 42, and then work part-time until age 50–and their retirement plan has a 0.7% chance of failing. That’s a big improvement over the baseline.

A Plot Says A Thousand Words

Here is one of the 10,000 market simulations, and the 60% semi-retirement scenarios (same as above) in that market. Each plot shows what our hypothetical nest egg looks like over the full 60-year career. Let’s zoom in on a few details: 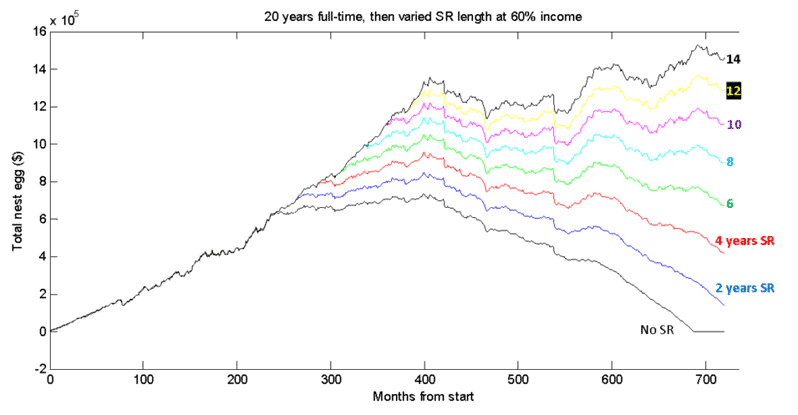 I want to present you readers with a few buckets of success/failure rates, and show you various semi-retirement plans that fall into those buckets.

Which semi-retirement plans are most similar to the baseline?

What a good question!

How can we tweak our subject’s career while maintaining results similar to the baseline 12.1% failure rate? Here are a few semi-retirement combinations that all fall between 11.0% and 13.0% failure rates.

Lots of options! We can see some expected conclusions from this data. For example, it takes a lot of 20% years to make up for each year we retire early. On a similar note, 80% semi-retirement is a reasonable proxy for working full-time.

Perhaps my favorite conclusion comes from the second and third rows: 16/16 and 14/14. Someone could plan their semi-retirement exactly halfway to retirement. They could approach their career like many do–30 years of work. The first half of their career would be full-time. The second half would drop down to 2 or 3 days a week. And they’d end up in a similar situation as our baseline FIRE planner.

Which semi-retirement plans get me <5% failure rate?

5% holds a certain allure in the FIRE community due to the original Trinity Study’s results. The quick-and-easy FIRE recommendation is that the 4% Rule has 5% failure rate looking backwards at historical market returns.

So, how might one approach semi-retirement to achieve a 5% (or better) failure rate? Here are some results, all of which have less than 5% failure rate.

Long story short: work full-time for nearly 20 years, and then tack on some semi-retirement at the end. That’s a sure-fire way to drive the original 12.1% failure rate to less than 5%.

Going into this article, I wasn’t sure how the math behind semi-retirement worked. How much semi-work does it take to make up for the fact that you might be quitting full-time early? I found this little study to be quite enlightening regarding that question.

Thanks again, Mr. SR, for giving me the go-ahead to run this little study and publish it on your site. I’m excited to hear back from all of you reading this. And if you liked this post, I publish every Friday over at the Best Interest. Hope to see you there.