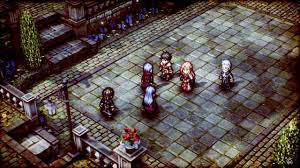 Sometimes it’s fun to take a break from all the stress of finances and forget about your worries for a while. One of my favorite ways to kick back and relax is by playing some video games. The main genre I like to play is RPGs. For me the longer the game takes to beat the better.

The most recent game I’ve played is Triangle Strategy. What I can say is that the name is terrible, but the game is great.

Triangle Strategy is more of a “Tactics” RPG style. You won’t be exploring a vast wide open world similar to XenoBlades or Final Fantasy games, but there is still plenty to do when it comes to your classic RPG leveling up, grinding, and equipment.

As far as a storyline goes, on the surface, it doesn’t sound that exciting. Basically, salt is a highly sought-after element in the world, with one of three major powers controlling it. The game eludes to previous wars over salt, and the storyline revolves around the seemingly inevitable recurrence of another “saltwar”.

The way the story unfolds is very well done. You’ll have decisions to make which can affect not only what battles you’ll face, but the overall outcome of the game. The storyline will keep you engaged all the way to the end.

For me, the gameplay is spot on as well. It’s very easy to pick up on the in and outs of battle. You’ll start by first choosing which characters you’ll be bringing into battle. Up next is deciding where each character will start the battle.

Once the pre-battle stuff is set, it’s time to get going. There is color coordination so you’ll easily be able to know where your characters can move to and where they will be vulnerable to enemy attacks.

Although controlling battles themselves is relatively easy to pick up, the difficulty of the battles themselves can be more difficult, which is a plus in my book. Simply floating through any game without difficulty doesn’t give me a sense of satisfaction, but getting stuck on a battle for days at time can get frustrating

Triangle Strategy finds a happy medium between the two. Battles are hard enough where you’ll need to level grind sometimes, but also need to think about your actual strategy in battle.

Depending on the path you take and the ending you see, more than likely you’ll want to replay Triangle Strategy in order to take the “Golden Route” to see the best ending. When replaying the game, you’ll keep all your characters, equipment, and levels, however, the game will require you to get to the highest level (level 50) with most characters before being able to beat the 2nd play though, again adding to the overall hours played.

Playing a 2nd time through will require much more grinding than the first play through to get many of the secondary characters leveled up enough to get you through some of the later battles in the game.

Overall, Triangle Strategy was one of the better RPGs on the Nintendo Switch. Enough depth and strategy that you can get through the game with some minor setbacks, but not so much to do that you lose track of the main quests. I would definitely recommend this game to anyone looking for a good tactics-style RPG.